The Two-Staging Project was one of the compressor station projects executed under the Shell-Bantrel Alliance contract. The TIC of the project was approximately $15 million, and Bantrel had total EPCM responsibility.

The station consisted of two De Laval sour gas compressors driven by General Electric drivers originally rated at 6500 HP. The compressors were configured with five 13" cylinders. Due to declining fired gas pressures, the station had to be restaged.

The construction was executed through a combination of five major, fixed price, lump sum and cost plus fixed fee subcontracts. A total of 100,000 man-hours were expended over a five month construction period during most of which the plant continued to operate. The labour force peaked at 130 people during the six week shutdown.

The Burnt Timber - Tandem Body Project was another of the projects executed under the Shell-Bantrel Alliance contract for compressor stations. Bantrel had total EPCM responsibility for the work.

The station consisted of two identical compressor trains operating in parallel. Each train consisted of one Solar C160 compressor retrofitted with Crane dry seals driven by a Solar Centaur T4500 gas turbine, through a speed increasing gearbox. Due to declining field gas pressure, the station had to be re-staged.

The construction was executed on a cost plus fixed fee subcontract approach, with two major subcontracts. The construction period lasted five months during which 30,000 staff hours were expended in the operating facility. Project strategy dictated two shutdowns with a four week break between shutdowns. Peak labour force was 60 people on a two shift basis. 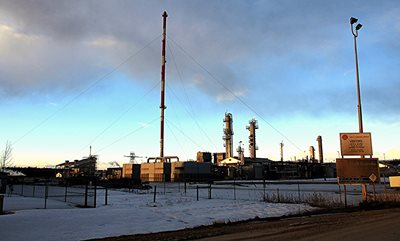