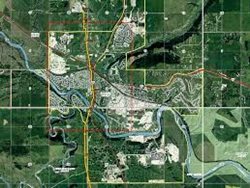 The gas turbines exhaust through a new Heat Recovery Unit (HRU), providing heat to the lean oil in place of an existing fired heater.  The fired heater was left in place to supply incremental heat to the process as required.

A pressure relief study of the existing plant was performed to identify the relief requirements of the new compressors.  This resulted in the addition of a new, secondary flare stack to replace the existing flare.  The new flare has a larger capacity and is taller to limit ground level radiation.

The new facilities were connected to the existing plant by a new Piperack.  Modifications to existing piperack were also made to accommodate new piping and electrical cable trays.